What is a Prospective FIP?
Prospective FIPs intend to meet the requirements for active FIPs within one year. These projects are posted on FisheryProgress to help users identify opportunities to support developing FIPs and prevent the start of duplicate FIPs. Prospective FIPs are not yet demonstrating progress toward sustainability.

A recent stock assessment noted that the biomass of swordfish in the northeastern Pacific Ocean is healthy and fishing mortality rates are stable. The biomass is not expected to decline at current fishing levels. However, the fisheries that target the species have some barriers to remove, like the fact that there are no formally adopted target reference points or harvest control rules in place. Also,d there might be issues with bycatch of sea turtles, sea birds, sharks, and other fish species in longline fisheries.

The Mexican Pacific swordfish fishery targets the Northeastern Pacific Ocean stock averaging annual landings of 760 metric tons and registers 52 vessels with commercial fishing licenses for longline of which, an average of 25 vessels operates in the season. 30 are registered in Baja California State and the 22 remaining vessels are registered in Sinaloa State. 95% of the landings are exported to the United States of America subject to the NOAA Seafood Import Monitoring Program requirements for the importation of certain priority fish and fish products that have been identified as being particularly vulnerable to IUU fishing and/or seafood fraud.

The goal of this industry-led effort is to design and implement a fishery improvement project that aims to improve important areas of the management such as, strengthen the harvest strategy, the related harvest control rules and the management strategy overall, in order to potentially have a conditional pass against the MSC Standard. 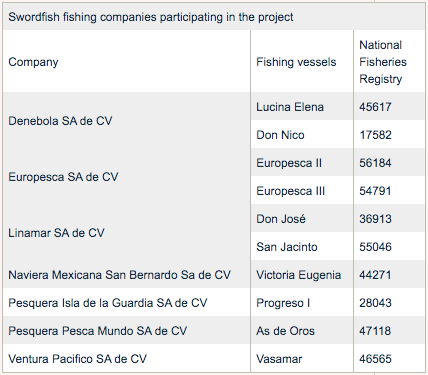 Swordfish is a highly migratory species of fish found throughout most of the world’s oceans. Adults are typically found between 15 degrees North and 35 degrees South, while juveniles are more common within tropical and subtropical waters.